While South Carolina’s economy has been reopening following coronavirus restrictions and the news related to COVID-19 has generally been positive, troubling reports have started to appear in recent days.  On May 27, the South Carolina Department of Health and Environmental Control announced that 20 people died from the coronavirus and that was the highest daily death toll yet in South Carolina.

Analyzing the number of new COVID-19 cases reported each day by DHEC since the pandemic began indicates that there has not yet been any sustained decline in the number of cases in South Carolina. 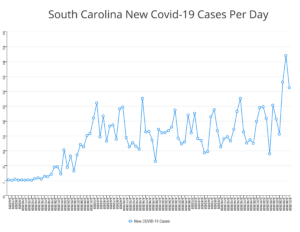 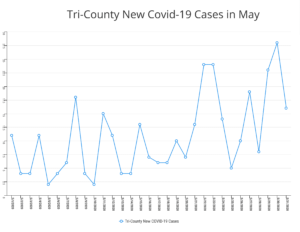 The same holds true looking just at the data for the tri-county region of Charleston, Dorchester, and Berkeley counties.  The new cases per day data for those three counties since the pandemic began in South Carolina shows that there has been no sustained decline in the new case numbers. 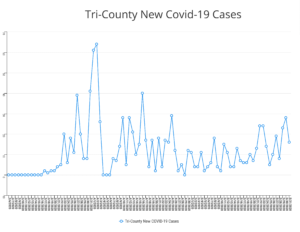 These trends are occurring at the same time that some restrictions are being lifted, more people are returning to their workplaces and eating in restaurants, and as a result, more interactions are occurring that can allow transmission of the virus from one person to another. As Emily Bohatch with the State newspaper reports: “That could mean that the virus is spreading
more rapidly than in weeks past, as the economy reopens and people worry less about adhering to social distancing guidelines.”

However, there is also some positive news in that the lethality of the virus is now believed to be lower than originally expected while still many times more deadly than the seasonal flu. NPR reports that recent results from antibody testing indicate that many more people than previously known have had the coronavirus but not sought medical treatment. Those results indicate that a large number of people have contracted the virus without any serious complications.

2 killed in boat crash were intoxicated

Last month a couple was killed when their 17-foot Ranger Bass boat crashed into a dock late at night. The two were on their way back from a friend’s house…

Last week, a South Carolina school bus full of children collided with an 18-wheeler in Aiken County, killing a four-year-old student and injuring the driver and raising questions about the…