A Story From Our Staff: Why Steinberg Law Firm’s Support For Breast Cancer Means So Much To Me…

A Story From Our Staff: Why Steinberg Law Firm’s Support For Breast Cancer Means So Much To Me…

Cancer sucks but we can all help the fight against it. I always look forward to the month of October – as many women across the world take the time to acknowledge the lives that have fought through the disease, they also honor the lives that were lost to the battle against breast cancer. Although there is “no cure”, many organizations rally each year to raise funds to provide resources for various services for the women undergoing treatment.   All cancer sucks, but the meaning behind the cure is the reason we fight.  According to the website, www.nationalbreastcancer.org: 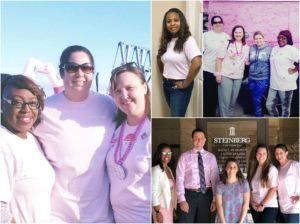 The last statement has touched close to home for me. Out of the 3.3 million breast cancer survivors, my younger sister, who is now 31… is one of those SURVIVORS!!!  In 2015, my sister had just found out that she was pregnant. Unfortunately, the double whammy was that on the same day, she also received a diagnosis that involved pre-cancerous breast tissue. What a bummer! With the breast cancer disease running very close in our family, (losing our grandmother Helen F. Brown and our grand-aunt Mittie B. Smith to the disease), we knew we had to be very precautious. While pregnant, the doctors were sure to treat her in a way that would not harm the baby. Numerous biopsies were performed and the doctors were certain she was going to be fine because the cancerous tissue had been removed in segments.  Fortunately, my sister delivered a healthy baby boy in November 2015. She named him Dallas. Yes, we are true Cowboy Fans.

Oh, the joys of motherhood – each day brought new experiences; but under the radar she was not in the clear just yet. Fast forward to February 2017, my sister was diagnosed with breast cancer- stage 0. The doctors were able to catch it again before it spread any further. After having received a few options, my sister made a conscious decision to have a double mastectomy in order to avoid the risk of the cancer returning and metastasizing. In July 2017, she was scheduled for surgery. At first, it seemed everything went well until we learned that she caught an infection a month afterwards due to not receiving antibiotics. Praise God, she fought that devil off too. The best news in the world for our family was that she had the chance to fully live out her life and was given the clearance that she was 100% CANCER FREE!! My sister, along with the millions of U.S survivors- fought like a girl by beating cancer’s butt! My nephew will be two years old this November 4th, and we are looking forward to raising a young man who lives up to his name!

With the luck she has been given to overcome this awful disease, she will be undergoing a few more surgeries. Believe me when I say that I will be with her every step of the way.  It is so important for anyone receiving treatment feels supported, and that is exactly what many great nonprofit organizations are able to accomplish by fundraising for patients each year .

Organizations that fundraise for this awful disease provide resources such as housing, transportation, treatment, recovery and so much more. I am proud to work for a firm that also stands behind the fight against not only breast cancer, but all diseases. This month, the staff at the firm wore pink every friday while we raised over $500 to donate towards a local housing facility that treats women undergoing treatment.

My sister’s story has touched me, as I deliver it you; all who choose to read it, I hope it touches you as well!