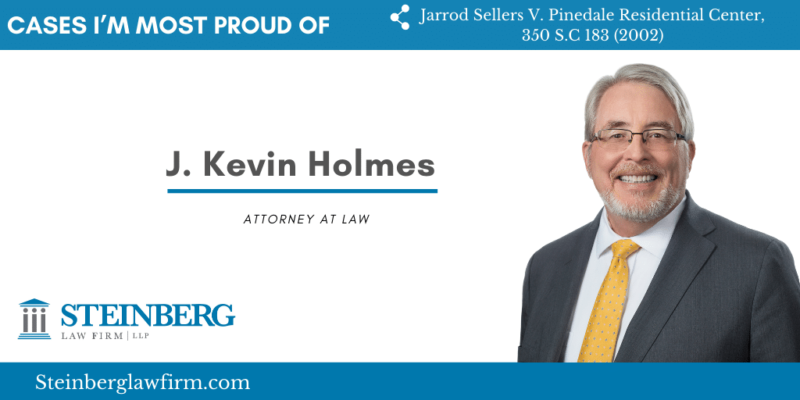 When we say “Get the Firm behind you,” it is not just a slogan, it is what we do. The decision in the Sellers case was the result of the combined knowledge, experience and efforts of Hugo M. Spitz, David T. Pearlman and J. Kevin Holmes to help not just our client but all working men and women of our State.

Hugo Spitz represented our client, Mr. Sellers, who was sixteen years old when he suffered a spinal injury that left him a paraplegic. He was a remarkable young man who worked three part-time jobs after school, one of which was at a residential center that he was working for when he was involved in a motor vehicle accident. Even after combining his earnings from his three jobs, he would have been left with a weekly compensation rate of only $91.04. Realizing such a low compensation rate would leave him destitute, the Steinberg Law Firm decided to argue that exceptional reasons existed justifying awarding him compensation based on wages he would probably have earned in the future but for his injury.

That is when the hard work began. Hugo Spitz and David Pearlman produced evidence that young Mr. Sellers had expressed a desire to follow in his father’s and his uncle’s footsteps to become an electrician. They produced evidence he would have qualified for a four-year union apprenticeship program during which he would earn increasing wages as an apprentice, as a journeyman, and ultimately as a master electrician entitled to a weekly compensation rate of $379.82. Hugo Spitz and David Pearlman did such a good job they won the case before the hearing Commissioner. Unfortunately, the employer appealed, and the Full Commission reversed the ruling saying there was no legal basis upon which to speculate what our client’s future wages would be. It then became my job to reverse the decision of the Full Commission by appealing to the Courts.

We argued our client’s disability extended into the future, and the ultimate objective of the Workers’ Compensation Act is to base awards on an injured workers’ probable future earnings. Circuit Court Judge Paul Burch agreed and reversed the Full Commission’s decision. More appeals followed, and it would be another three years before the Court of Appeals would uphold judge Burch’s decision. Because Mr. Sellers had the firm behind him, he was saved from a lifetime of poverty, and because of the combined efforts of three of the firm’s lawyers, the rights of all workers to receive fair compensation were protected.

If you have been injured, the insurance companies will not have your best interests at heart. They hire teams of attorneys, adjusters and investigators all working to pay you as little as possible. They will likely throw out lots of legal jargon and try to get you to sign paperwork or waive your right to compensation. Get the firm behind you, and let us do the heavy lifting for you, so you can focus on getting better.

Distracted driving is among the biggest causes of fatal crashes in the United States today. While texting and driving is one of the most dangerous causes of driver distraction, it’s…

Thomas White recently settled a complicated Workers’ Compensation case for $165,000 after the workers’ comp carrier tried to deny his clients claim based on a preexisting condition. His client was working…